This is an older post but I’m missing my Dad today, so I thought I’d repost it.  He was quite a character. 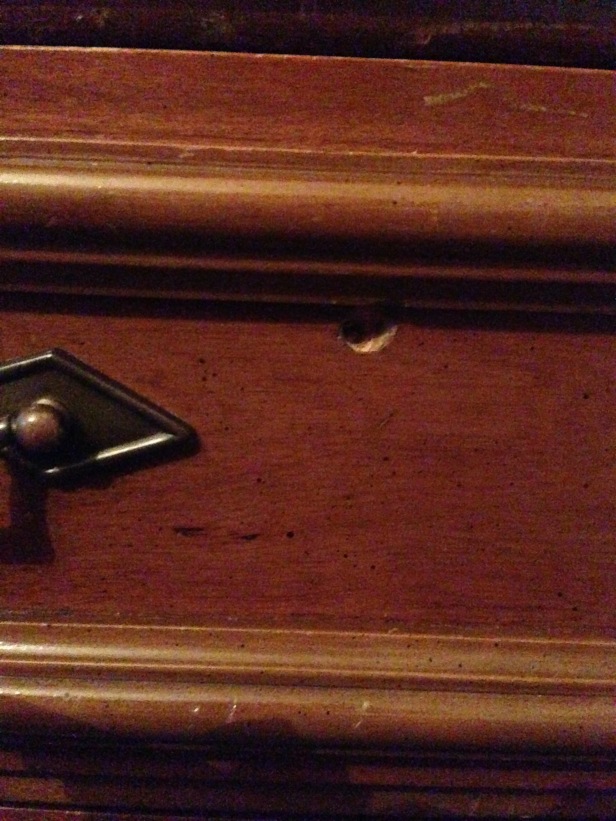 When I was about 10 years old, my grandmother brought me to our local bank to start a Christmas Club account. She thought this would teach me responsibility and character. We went into the bank and sat at the special desk off to the side and I received my Christmas Club coupon book. Each week I would go into the bank with my two dollar deposit. The teller would officially tear out the coupon and record my balance on the inside cover. She always called me Miss Yeager and it became kind of a ritual that made me feel very grown up. Then the incident happened and banking would never feel quite the same.

Late one night my mother woke up when she heard a noise downstairs. She shook my Dad awake. “Ed, I think someone is downstairs!” Dad jumped out of bed and rummaged in the nightstand and found his….gun. He stood at the top of the stairs and yelled “If anybody is down there, you better get out! I have a gun!” I pulled the covers over my head.

He slowly went down the steps. “I have a gun!” he yelled again. He creeped into the family room.  He shouted again…I’m coming down and I ‘m ready to use this gun!  Nothing there.

The living room. Nothing.

The next room was the dining room off to his right.

He thought “What if this guy is hiding around this corner?” So he slapped the pistol into his left hand and quickly stepped into the dining room.

The sound of a gunshot seemed to fill the house.  It felt like even my bed shock. There was a long silence. Dad didn’t move for a long time.. His mind went into slow motion. Was he shot? Was he bleeding? Where the hell was the shooter?

Then he realized he was alone.

Slowly he figured it out. He had accidentally pulled the trigger with his clumsy left hand. He had randomly shot into the dining room.

My father had shot the dining room buffet. His voice filled the still vibrating air….God Damn it Rose!!

He stormed back upstairs with his heart racing. He slammed the gun down on the nightstand.  I could hear him tell Mom that  the next time she heard a noise, she could check it out herself!

In the morning I went into the top drawer of the buffet to get my treasured bank book for our weekly trip to the bank. Then I saw it. It had a bullet hole right through it. “Dad, I can’t bring this to the bank! It has a bullet hole through the whole book and the money that was inside it.” Dad was still pretty upset from the night before. He had no time for my whining. He said “It happens all the time. Just use the damn book!”

Suddenly no one wanted to go to the bank with me. Mom drove but waited outside in the car. I should have known that was a bad sign. I slowly walked into the bank alone and hesitantly I went up to the teller. At first the teller greeted me with her usual smile. “Good afternoon, Miss Yeager.” I smiled back and pushed the coupon book across the counter. The teller’s smile faded. She pulled out the two dollar bills and held them up. The bullet hole was pretty noticeable. Then she picked up the coupon book. There was a matching hole through all the remaining coupons.

She looked up and said slowly….Is this a bullet hole?

I nodded confidently and said “My Dad says it happens all the time.”

She quickly brought the book over to the other tellers and they huddled around it. They glanced at me and then the book and back again. It was then that I knew something was wrong.

Every week for a year I had to bring that damn book into the bank. Every week the teller quickly took my money and avoided eye contact. The other tellers would keep their heads down and try to look busy.

Maybe it didn’t happen all the time.

2 thoughts on “IS THAT A BULLET HOLE?”