Yesterday we traveled by bus from Fatima, Portugal north through most of Spain. We stopped in a town called Salamanca for lunch and a quick tour. It really was just to break up the day and although they have a beautiful and very historic university there we just kind of cruised through it. Then we got back on the bus and got on the road again. We spent the night in Burgos, Spain. They have an amazing cathedral and I will include pictures. These Spaniards put the Italians to shame when it comes to decorating cathedrals. The gold and the carvings are too much to even describe. 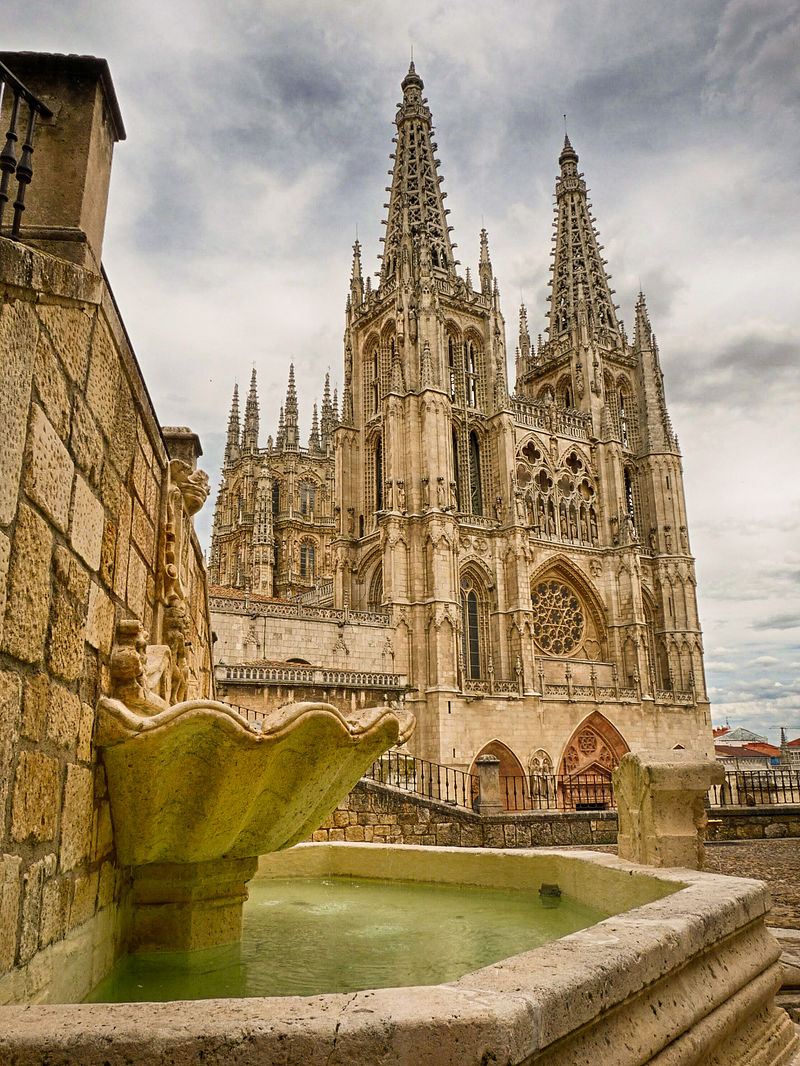 We got into Burgos too late for our scheduled mass in one of the chapels at the Cathedral. That was ok by me because we were all just so darn tired. We had been in that bus for like 7hrs. Instead of cutting the Mass from our schedule, they rescheduled it for super early the next morning. Their new plan was to go to Mass then come back to the hotel for breakfast, then start our day. Ugh, That was way to much form me. I felt like my rheumatoid arthritis has hit its limit. I started taking prednisone a few days ago and can literally not walk even a few minutes without the cane. There are just so many steps in these old towns and then there are those cobblestone streets. I’m so afraid I’m going to fall. My ankles and my shins are killing me. It feels like the tendons are seizing up. I think it’s the uneven sidewalks, walking up and down hills and all those steps. I’m lucky because both my cousins quietly keep an eye on me. Just when I get to the some high uneven medieval steps, I feel a hand on my elbow steadying me. Sometimes I feel like saying ..no no I can do this myself. But then just tonight I was going up some curving steps and started to stumble. If it wasn’t for Carolyn holding onto me, I know I would have fallen.
It’s weird that at home I struggle about feeling different, that I can’t do all the things I used to because of my RA. I hate to use the cane unless I absolutely have to. When I use it I feel like I stand out like a sore thumb. I hate that I can’t be just like everyone else. But here in Fatima and now in Lourds, there are just so many people with canes and wheelchairs, scooters and even being moved thru the square on stretchers, I know there are so many with bigger problems than feeling awkward with a cane. It’s like here having some kind of physical issue is the norm here. It’s a very unique experience. And our hotel lobby I couldn’t help but notice a small alcove full of wheelchairs and rented scooters . 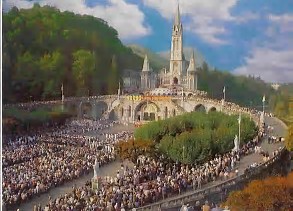 Our arrival in Lourdes, France was again not what I expected. It’s a small town that dates back to Pagan times and a Fortress from 100BC.  Some streets are so tiny the walls on either side would brush your shoulders. The main streets are packed with hundreds of tiny little shops that sell of religious souvenir you could ever imagine. I bought Rosary Beads, Bottles for Holy Water and any slightly inappropriate souvenir I could find. Don’t ask.

They have a big problem with gypsies and pick pockets. We were advised not to carry anything with us that was important. The huge tour buses pass within inches as you walk down the street. It wasn’t how I pictured it would be in my head.

We had dinner in our hotel again tonight. The city is so busy we weren’t sure where to go for dinner. We wanted to try and find something better than the hotel. Hopefully will do that tomorrow. The Lourdes looks like a mix of a mountainside medieval village and a New Jersey boardwalk. We saw very few Americans in Lourdes. Most multilingual signage doesn’t even have English as a choice. We were really out of our comfort zone.
We caught up to my friend Adela. She had been thoughtful enough to buy a few extra candles and gave them to us so we were all set to head out for the candlelight procession. The streets were so packed that within minutes we had lost our group. Luckily my cousin Ed is so tall, I can always find him in a crowd. We were directed to the end of the line and after a short time the speakers came on and they started praying the rosary many different languages. There was one section of the crowd just for sick people. There are hundreds of wheelchairs, scooters and stretchers being guided along by nurses and volunteers. The crowd was so large I can’t even begin to guess how many thousands of people there were. Think of a professional football game kind of crowd.

​​
Like in Fatima, no one pushed or crowded one another. Maybe it was because our heart were in a higher spiritual place or maybe it was because we were all holding lit candles and could easily sent each other on fire. Some people opted for the candles that have a paper shade their candle instead of the plastic. I saw at least five of them catch on fire. For some reason rather than dropping the burning candle with the flaming paper shade and then stepping on it, they all waived it around or blew on them which only seem to make it worse. It was a little intimidating. But the crowd was gentle and quiet and we all just shuffled along. People sang and prayed in languages that I couldn’t even begin to guess what they were. There were flags from many countries, families, church groups, nuns and priests of every kind and even groups of teenagers. But the ones that broke my heart were the ones carrying their children. Even from a few feet away I could see from their mothers expression that they were hoping for a miracle for their child.
It’s hard to explain what it was like to be among so many people that were praying together. Everyone was so polite. I reached into my pocket for a tissue and dropped 3 five euro notes. Two men rushed to my side to retrieve them and return them to me. The procession was very very long. I did OK walking until we got near the end. Then I started to get wobbly and stumbled a few times. Carolyn was immediately at my side to study me. I didn’t expect to feel so safe, so far from home and in such an unfamiliar experience.
​​

I think because there was so many people everywhere and the Lourdes is so packed with souvenir shops and buses, it didn’t seem to have the same little bit of magic feeling that Fatima had. Maybe because the procession was so large. Just being in a crowd that big is a little intimidating.  We will have Mass at the Grotto where Our Lady appeared and then on to the baths. I’m hoping I can get a little more spirituality experience with doing the big dunk.
Our little crowd has turned into a little family. We all look out for one another. The group has just naturally shuffled itself into different combinations for our group meals. It’s nice because we get to know each person a little bit. Everyone has their story. But these people are easy to like. They are just plain nice. And not too crazy religious. We all laugh and sometimes forget that there’s a priest among us. That’s probably because he’s a bit of the ringleader with the bad jokes.

Please know if you’re one of my people that is going through a difficult time right now, I am praying for you. I’m lighting candles for you. And I’m getting holy water for you. I am trying to capture just a little bit of that miraculous spark I’ve experienced and send it to you through my heart. You know who you are.