Yesterday was the big dunk.

The baths at Lourdes,France. St Bernadette.

WIKI: Bernadette Soubirous; 1844 – 1879 was from Lourdes  France, and is venerated as a saint in the Catholic Church. Known for asking for a chapel to be built at the nearby garbage dump of the cave-grotto where apparitions are said to have occurred between 11 February and 16 July 1858.  Despite initial skepticism from the Catholic Church, Soubirous’s claims were eventually declared “worthy of belief” after a canonical investigation, and the apparition is now known as Our Lady of Lourdes. Since her death, Soubirous’s body has apparently remained internally incorrupt, but it is not without blemish; during her third exhumation in 1925,  her face and her hands were covered with a light coating of wax due to the discoloration that her skin. 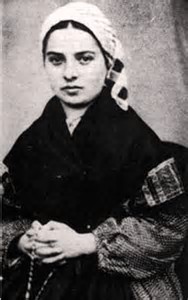 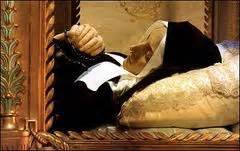 WIKI: To ensure claims of Miraculous Healings were examined properly and to protect the town from fraudulent claims of miracles, the Lourdes Medical Bureau  was established at the request of Pope Saint Pius X. It is completely under medical rather than ecclesiastical supervision. Approximately 7000 people have sought to have their case confirmed as a miracle, of which 69 have been declared a scientifically inexplicable miracle by both the Bureau and the Catholic Church.[39]

We started the day with a Mass at The Grotto. This is the place where Saint Bernadette saw the apparition. There were around a dozen priests from various English speaking countries. Two were with our trip. It was a relief to hear English for a while.
There was a walking tour of significant places of St Bernadette’s life like her home during the time she experienced her visions. It was really something to be in a Saint’s home.  Her family was living in extreme poverty in a tiny two room ex-jail.
We saw photo’s of her and were given endless facts about her life. Hollywood did a movie about her in 1943 called the Song of Bernadette. I rented it before the trip/ It was pretty good. Then before we knew it the afternoon has slipped by and it was time to line up for the baths. The big dunk. We got in line early as we were instructed. Ed broke off into the men’s area and headed to the lady’s. Carolyn and I took Barb in her wheelchair. Her husband wanted to take her but we explained that we didn’t think that was possible. There was a third waiting area just for the sick. Barb didn’t want to go there. She just wanted to be in the regular queue.

When one of the volunteers spotted Barb’s wheelchair, he spoke quickly and firmly in Italian. I have no idea what he was saying but he wanted Barb to come along. Carolyn got up to handle the wheelchair. I asked to come too but he held up two fingers and shook his head. They lead them away and suddenly I was alone surrounded my no one I knew or spoke English.
I waited and was at the front of the queue in no time. I was getting more and more anxious. I heard an old lady crying behind the curtain ..No!  Then a child crying terribly. The was one sign in English but it was just far enough away that I couldn’t read it. It was telling me to do something but I had no idea what.
A stern looking woman dressed in white motioned for me to come. My instinct was to get the heck out of there. Instead I took a deep breath and got up.  The woman led me behind the curtain where 4 other women were getting dressed or undressed. Another volunteer held up a cloth in front of me. Did she want me to put it around me? I started to take it from her. No, No! She pointed to my pants. I tried to quickly take them off but my nerves made me clumsy. After a lot of pointing at my various pieces of clothing, I was naked. She wrapped another cloth around me an almost pushed me thru another curtain and into the next chamber.

Now there were four nun/volunteer ladies nudging me forward. One said, USA? I said yes. She said ‘take step’. I did. They replaced the cloth I had with an ice cold soaking wet towel that did not cover much.
Then the woman said- PRAY! I said to myself – God, I gave you my list in the waiting room. Please remember because I can’t think!
Then she barked- walk! I stepped to the front of the tub. I have never felt anything as cold as that water. Just as my brain was registering.. COLD! They said SIT! All four women pressed down on my shoulders and in a flash I was in. I wanted to scream but I couldn’t breath. It was soo cold all I could do was inhale and panic. Then they were pulling me out. I don’t know what my face looked like but they repeatedly asked, OK? I still couldn’t form words. I just nodded.
I was back in the dressing area with that same nun holding that same brown towel up. I heard another woman being told No! When she tried to dry herself. I think the idea is not to wipe off the Holy Water.
I got dress as fast as I could while my entire body shook. When I got to my socks and shoes the woman pushed my hands away. That seemed to be her job. Then suddenly I was lead outside and feeling wet and disoriented. I took s few steps but felt confused. I saw Carolyn waving and she lead me back to the group. I was speechless for quite a while.

Well, that was something. A big something. I just an not sure what…yet.
We escaped the crowds into a restaurant on a small side street. We were back with our friends and a quiet meal overlooking the river was just what I needed.
I’m not sure yet how I felt about the Lourdes bath. It was an intense moment and I was a nervous wreck, so I think I need time to digest it all.  The visitors here are referred to as Pilgrims. Before this trip I was joking and talking about wearing a Thanksgiving Pilgrim hat onto the bus. That’s what a Pilgrim was to me. Not now.

I Googled it. A pilgrimage is a journey or search of moral or spiritual significance. Typically, it is a journey to a shrine or other location of importance to a person’s beliefs and faith. People have been going on Pilgrimages all through out history. They still do. Muslims go to Mecca. Jewish people go to Israel.

Other Americans … not so much. I guess its not totally uncommon for American Catholics to go on a Pilgrimage somewhere, I just don’t know if any. Lourdes is 7+ hours by train from Paris. It’s not someplace you can just stop in.

So why do people do it? Why don’t people do it? Too far? Too much time? I rather be on an island somewhere? Why was I taken by such surprise with the intensity of this experience?   I have to give all this some thought.

If you ever get a chance… do it. It was much more than I ever thought it would be. I’m not sure exactly how I was effected, but something on this trip was a very big deal.

2 thoughts on “Lourdes and The Big Dunk”